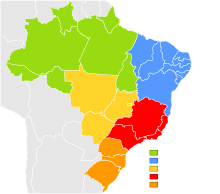 The states of São Paulo, Rio de Janeiro, Minas Gerais, and Espírito Santo in red are all affected by the drought
. The Brazilian Arabica Coffee is grown in this region
. Most of it in Minas Gerais
. Espírito Santo is more a Connilon (Robusta) region.

The 2014–17 Brazilian drought is severe,  and the drought is affecting the southeast of Brazil, including the metropolitan areas of São Paulo and Rio de Janeiro. In São Paulo, it has been described as the worst drought in 80 years. The city of São Paulo seems to be most affected and by the beginning of February; many of the city residents were subjected to sporadic water cutoffs.

Rain at the end of 2015 and in early 2016 brought relief, however, long term problems in water supply remain in São Paulo state.

The states; Minas Gerais and Espírito Santo are still being affected by drought in 2016/2017 due to the 2014–16 El Niño event. In these areas the rain has been irregular since 2014 and the drought worsened from 2015 and it does of course make an impact on coffee prices. Less coffee, higher price.

Now, before the harvest of 2017, starting in April/May until August, they see that the Connilon harvest will be 8% lower than normal.

The drought situation is not unexpected

. São Paulo is experiencing its third consecutive year of diminished rain falls. Already in early 2014 a drought situation was experienced. Poor water management, with leaking pipes, and an old infrastructure. Past reports by scientists, environmentalists and technical experts were overridden by real estate developers and industrial and agricultural interests. Lack of protection of watersheds and reservoirs has polluted water sources and made it difficult to bring usable water to the market

Deforestation activities into the Amazon basin has been linked to the reduction of rainfall in the south of Brazil.

Even if the Amazon’s evaporation was enough to generate flying rivers, urban heat islands coupled with a heat wave prevented the arrival of humid air masses that generate rain.

How does this affect the Coffee prices. The Connilon (Robusta) harvest in Espirito Santo is 8% lower than normal and the price of the bean in April 2017, is 21% up, compared to April 2016.

Coffee is good for you: Myth or fact?

Spread the love A rarity in the coffee world Maragogipe is a type of arabic affair, also known as Elephant Coffee